We would like to inform our fans and supporters that we have made the hard decision to withdraw from the upcoming Australian Powerchair Football Club Championships to be held in Sydney next week.

The team had been preparing for the competition over the past few months but due to unforeseen circumstances, the team just doesn’t have enough players to attend.

We would like to wish both Julia Svaganovic and Luke David all the very best in the competition as they will be loaned out to South Melbourne Powerchair FC and Western Sydney Wanderers Powerchair Team respectively.

This is in no way, shape or form going to impact our sustainability as a club in the future. We are fully committed to participating in local competitions and at future national competitions. Plans have already begun on recruiting the next generation of City powerchair footballers for the years ahead.

We look forward to continuing our VPPL Pre-Season at the start of February and getting an early start on preparation for the 2021 Club Championships! # 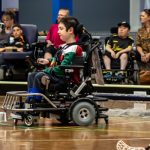 Two Melbourne teams attended the inaugural Powerchair Hockey Club Championships held in Sydney last month. It was a fantastic event held by Australian Powerchair Hockey Association (APCHA) which was also attended by Canada. We are so proud of our two Melbourne teams who finished the competition in 2nd and 5th place. You can find a ton of photos from the event here: https://pbase.com/wrs864/club_championships__canada_2019

PowerHockey Canada has accepted the invitation from Australia to compete in the Australian #PowerchairHockey Club Championships as well as a series of international matches between the two nations this November!

The two countries recently met at the World Championships in Italy last September where Canada won the 7th/8th playoff 4 – 2. Canada is relatively new to Powerchair Hockey as they have played a different form of Hockey in the past. Both countries look to grow the sport as they try to catch up with the powerhouses of Europe.

Melbourne City Powerchair Team has been drawn in Pool B for the 2019 APFA Club Championships.

Despite a poor record at the Club Championships, City can take some confidence into the competition after beating Perth Glory and Central Coast in recent years.

It will be an exciting competition with more teams attending than ever before. Melbourne City Powerchair Team will also introduce two new debutantes with Gavin Thorneycroft (VIC) and Kieran Watts (NSW) joining the team.

Luke David will retain the captaincy for Melbourne City FC Powerchair Team for the upcoming 2019 Australian Club Championships held in Sydney next month.

Being an inaugural member for the Powerchair Team since its inception in 2015, David has consistently been a high-performer, with significant state and national experience, David feels his maturity and leadership qualities continue to grow.

The competition will begin on the 14th of January with two groups of six teams battling through the group stages. The finals will take place on the 19th, all matches will be held at Hall of Legends, Quay Centre, Sydney Olympic Park.

While David will wear the armband, the midfielder is excited to see his three team mates lead the club to its highest finish. “I’m looking forward to the challenge, we have two new debutantes in the team which is vastly different to our squad last year but we have put in a lot of hard work to prepare us for the competition. We’ll go out there and do our very best and hopefully that is good enough to get us our highest finish” said David.

The team will feature two new debutantes in Kieran Watts (NSW) and Gavin Thorneycroft. Kieran will join the team on a short-term loan and has been selected as Vice-Captain.